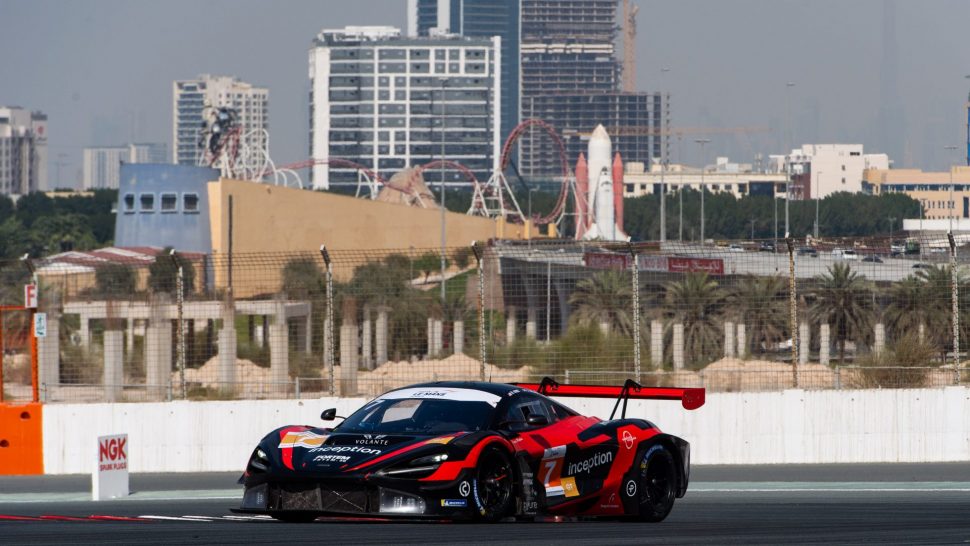 Following the runner-up position in the GT class yesterday at Dubai Autodrome, the #7 Inception Racing trio of Brendan Iribe, Ollie Millroy and Ben Barnicoat today (14 February 2021) had to be content with a fighting sixth, 19th overall, in the second round of the Asian Le Mans Series.

Brendan took starting duties, quickly making his intentions clear as he carved his way up to 11th position by the start of lap four. It was to be a short stint for the American Bronze racer however as the team opted to pit him at the first available opportunity, and that came as soon as lap six with the first Full Course Yellow. Ollie jumped into the car with 19-minutes on the clock and with a further caution period soon after, he was able to extend his stint to ensure just two further stops later in the race.

However, Ollie, unfortunately, re-joined the racing action just as the first caution period was coming to an end, meaning that some of Brendan’s hard work during the opening laps was undone. Undeterred, Ollie pressed on from 17th place, dispatching the #35 BMW and slotting in behind the #1 HubAuto AMG. Approaching the one-hour mark, Ollie had moved back into the top ten as he shadowed Liam Talbot ahead.

Under pressure, the #1 made a small error and ran off track on lap 32, allowing Ollie through to sixth position and he soon cleared the #54 of Francesco Castellacci to run fifth ahead of the handover back to Brendan.

The middle segment of the race saw the Inception Racing driver work his way back up the order before handing over to Ben for the final stint in ninth place. The British racer found himself behind the #1 HubAuto Mercedes once again, this time driven by Raffaele Marciello, and the battle continued throughout the final hour of the race and right to the chequered flag.

Fourth, fifth and sixth position all ran together on track in the final laps with Ben seeking a way past the #1, who in turn was trying to pass the #99 of Ralf Bohn. Ultimately, after four hours of racing, it came down to the last lap, with Ben just missing out by less than a tenth of a second in a near photo finish in sixth position.

With two rounds of the Asian Le Mans Series completed, Inception Racing leave Dubai and travel up the coast to Abu Dhabi for the concluding two race of the championship which takes place next Friday and Saturday. With a second and a sixth position secured already, the team are confident that the final two rounds at Yas Marina should be very well suited to the qualities of the McLaren 720S.

Shaun Goff, Team Principal
“It was another good performance from the team. Two races and two strong results show that it has been a good start to our Asian Le Mans Series challenge. We did want a little more today, and perhaps we were a little unfortunate to lose track position in our first pitstop but now we head to Abu Dhabi and I think we will be especially strong there.”

Ollie Millroy
“A solid day again all things considering. We were a bit unlucky with the first Full Course Yellow as it went green again when we were in the pits. I had to fuel save for my whole stint as the first stop was really early and I managed to get 39 laps out of it to get us back on track.

“The car hasn’t missed a beat all week which is a huge credit to Inception Racing, Optimum Motorsport and McLaren Customer Racing. It’s been a really strong weekend as a team and we’re well within a shout of the championship. With Brendan’s ambition of going to Le Mans, the winning entry is a huge motivation for us and we’re super fired up for Abu Dhabi!”

Ben Barnicoat
“It’s been a great debut for the McLaren 720S in this series and it’s been a mega first weekend for me with Inception Racing. It was a good race for us, but unfortunately, the first stop did cost us a little time as the track went green just as we were in the pitlane. That didn’t pay off for us on this occasion, but if it had worked out, we would have looked like heroes! Today, even from the back of the field, I think we would have been on for a P2 or P3, but the pace was there and that’s the main thing.

“Brendan and Ollie again did great stints, then I was in and chasing the #1 Mercedes. I nearly had him and then got stuck behind some back-markers so just missed out on getting that position. A big thank you to the whole team for all of their efforts and we look forward to next week in Abu Dhabi.”