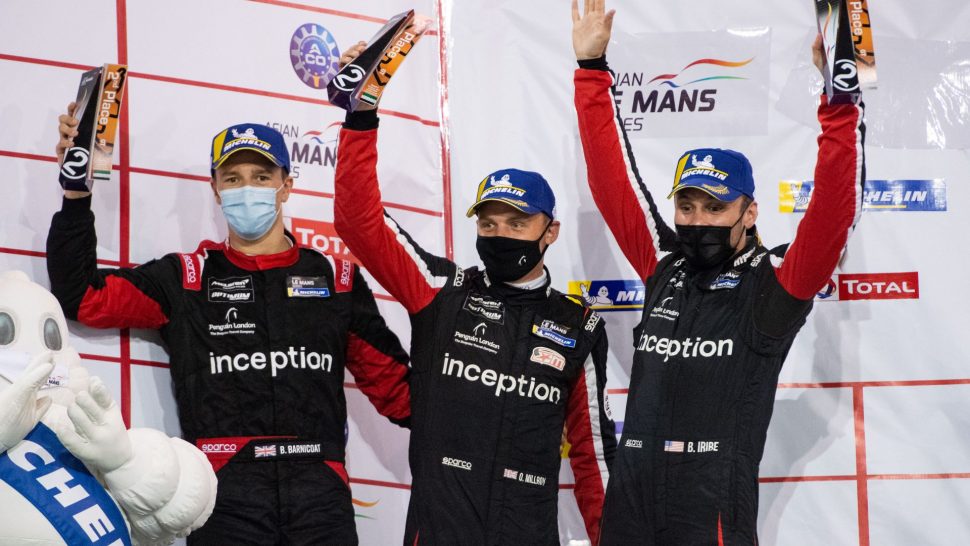 Second position in the GT class at the season finale was the conclusion of a dramatic Asian Le Mans Series season finale today in Abu Dhabi and with it, an additional 18 valuable points that earn Inception Racing an automatic invitation to compete at the 24 Hours of Le Mans later this year.

Saturday’s four-hour endurance event saw the #7 Inception Racing trio of Brendan Iribe, Ollie Millroy and Ben Barnicoat work their way up from seventh position on the GT grid, to lead the class for much of the second portion of the race. Ultimately though, the team had to settle for second position after being adjudged to making contact passing the #99 Porsche in the closing stages.

Brendan made a great start from seventh position in the 19-car GT field, vaulting to fourth position. The early stages of the race saw two separate Safety Car interventions, the Inception Racing crew opting to leave Brendan out to the end of the second caution, thereby reducing the number of required stops to the minimum of three. This strategy, combined with the pace of the McLaren 720S, paved the way for a race winning challenge.

After 22 laps and just under an hour of the event complete, Brendan yielded for Ollie for the second stint, resuming the race in fifth position. This became third behind the #88 of Alex West as others began to make their second stops and then second position with an excellent pass on the Aston Martin racer into turn five.

Ollie briefly took the lead before concluding his stint with Ben jumping in the McLaren, quickly catching the #34 Walkenhorst entry and taking the lead on lap 67. The third and final stop saw Ben exit just behind the #99 Precote Herberth entry, making the pass for position by the end of the lap and set his sights on the class leading #57 Ferrari ahead.

In a final twist, Ben was soon instructed to allow the #99 Porsche back ahead as he had allegedly made contact in his pass for position. With the #99 car 11.5 seconds back, Ben slowed and gave back the position and soon after retook the place. Now however the leading #57 was out of reach for the victory and the Inception Racing crew had to settle for second position, ten seconds shy of the race winner.

With two podium positions in the GT class and two further top ten finishes, the team finish fourth in the GT Championship, and with the result, win an automatic invitation to the 24 Hours of Le Mans. The team now begin preparations for its forthcoming GT3 programmes in Europe as well as a tip to Circuit de la Sarthe.

Ollie Millroy
“What a mega result and a really solid finish. We really deserved to win that one, but we had to let the #99 back ahead due to some light contact and that cost us the win. Brendan made an awesome start and we’re all thrilled with the Le Mans entry. Now we just need to figure out how to use it!”

Ben Barnicoat
“It’s great to end the Asian Le Mans Series on a high note and with the P2 finish, the team did an outstanding job today. Brendan’s start was amazing and to hold some of the Pro drivers off as long as he did was just unbelievable. The second safety car lasted just long enough for us to get Brendan’s drive time completed and then Ollie was in the car, but we didn’t have time to catch the train of cars ahead up. So, we were 50-second behind at that point and but he got his head down and closed the gap.

“I got in for my double-stint and was so happy with the car. The pace was impressive, and the car felt great. Into that last pitstop, I had to make some big moves but unfortunately, I had to let the Porsche back by which I consider to be an unfair penalty, but these things happen. Were it not for that, I think we were in for a win today and the 720S was brilliant all afternoon. Big thanks to the Inception Racing team, Brendan and Ollie, it’s been a great few weeks together and I hope I’ll be back with them at a later date.”

Shaun Goff, Team Principal
“Everyone in the team has all worked so hard. It’s still only February and we have had a very busy start to the season. To feel a little disappointed with second place underlines how well we raced today in Abu Dhabi. The second podium in four starts though gives us fourth position in the Asian Le Mans Series GT Championship and now we need to think hard as to how best use our invitation to the 24 Hours of Le Mans. Congratulations to the team and our three great race drivers.”