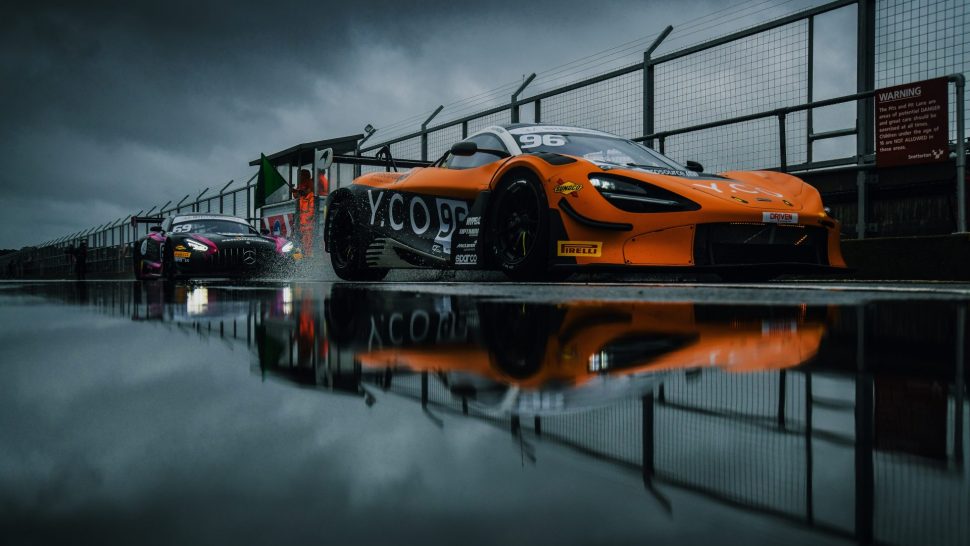 The penultimate Intelligent Money British GT Championship meeting of the season at Snetterton saw Optimum Motorsport secure a welcome podium position, the second of the season, in tricky wet conditions that dominated the race weekend.

The result underlines the recent progress the #96 McLaren 720S GT3 pairing of Ollie Wilkinson and Lewis Proctor have made at recent events, carrying the improved Donington Park form into the two 60-minute races this weekend. This is something that may well be applicable at the forthcoming 24 Hours of Spa and the season finale Silverstone round.

The team worked hard on the wet setup throughout the two practice sessions on Saturday and were happy with the progress. Qualifying saw Lewis and Ollie record the sixth and eighth-best times overall in the two qualifying runs, good for sixth and third in the Silver Cup order.

Race day brought more of the expected rain to the Norfolk-circuit, necessitating a safety car start. Once underway properly, Lewis got his head down in what had become fifth on the grid following an issue for the #9 McLaren ahead. The rookie GT3 racer made short work of the RAM Racing entry of Ian Loggie and with the Jordan Witt pushing Sam de Haan onto the grass, Lewis was able to capitalise and move into second position.

For the remainder of his stint, Lewis kept the pressure on eventual race-winner Witt, the gap remaining relatively consistent at around the two-second mark. On lap 11 he pitted and handed over to Ollie who resumed in second position with a handy margin to the #78 of Sandy Mitchell.

While dropping back from the #10 McLaren, now in the hands of Jack Mitchell, a second position overall seemed to be on the cards. However, Ollie suffered from grip issues in the final laps, he was denied the runner-up position by the #78 Barwell Motorsport Lamborghini by just 0.081s.

The second race saw Ollie start from eighth overall, third in class and was soon embroiled in a terrific battle for position with the #9 McLaren of Angus Fender. Ollie ultimately had to yield just ahead of his stop and then it was up to Lewis to hound down the sister 2 Seas McLaren of Mitchell. In applying pressure in the closing stages, Lewis forced a mistake and claimed seventh position overall, fourth in the Silver Cup.

The team now prepare for a run of events, including the toughest challenge of them all, the 24 Hours of Spa ahead of the British GT season finale at Silverstone in November.

Shaun Goff, Optimum Motorsport Team Principal
“We achieved our objectives for the weekend and that was to carry on making gains in terms of the car setup in the wet conditions and a podium was a good reward for all of the hard work. The drivers had some ideas where we needed to focus our attention, so it’s good to have carried forward the programme so well. Two points-scoring results, so a solid result even if we are still hunting for that elusive first win of the season.

“We have the Spa 24 race coming up soon and it’s a big and important race for the drivers and team, so it’s good to have some more information to take into that race and Silverstone, which is bound to be colder and wet being in November.”

Ollie Wilkinson
“It’s been a case of some good racing and a lot of experience for us in these difficult and colder conditions leading into the Spa 24. Regardless of any result – and I’m happy with the podium – we are all lucky to be here and able to race in the global pandemic, so it’s important to remember that. We perhaps didn’t quite get the results we had hoped for in the two races, but it’s all good information that we can carry on to future races and we have certainly learned a lot in the last few events.”

Lewis Proctor
“Race one was really good and I felt confident in the full wet conditions we had here today. I had always wanted a wet race and when I saw that it definitely would be, I was rubbing my hands together. The start was eventful, I made some good moves to jump from fifth to second. It was good to get that podium.

“The second race was always going to be tougher with the success penalty as we’re all so close. The car is super-strong in full wet and it was colder as the day went on, so it’s always a moving target with tyre pressures and setup. It was fairly spread out and I was on my own until I started to close in at the end of the race, so a lot learned, and the result is what it is.”