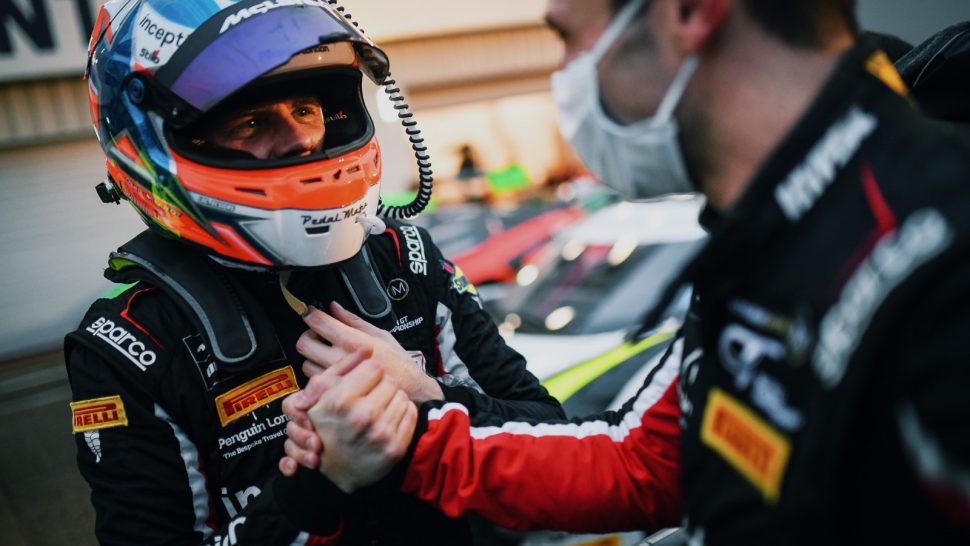 The final round of the Intelligent Money British GT Championship at Silverstone was a bitter-sweet affair for Optimum Motorsport who fielded a trio of McLaren 720S GT3s for the three-hour endurance race. An overall podium position and Silver Cup win looked to be there for the taking until late-race contact dropped the #96 entry down the order. Similarly, a potential third position for the #77 car was on the cards, only for an electrical glitch costing time in the final stint.

The #96 Silver-Silver pairing of Ollie Wilkinson and Lewis Proctor ran in the top three for much of the second half of the race, while Mark Crader made his GT3 debut in the #68 McLaren alongside 2007 champion Alex Mortimer.

It was however a positive weekend for the team with the #77 duo of Brendan Iribe and Ollie Millroy making their debut in the series together, running with the leaders and showing great pace, before ultimately finishing seventh overall, third in the Pro-Am class.

Qualifying on Saturday afternoon saw the #97 McLaren of Ollie Wilkinson and Lewis lead the way with a strong sixth position. Brendan and Ollie Millroy were next up in 15th place, with Mark and Alex 19th. Sunday dawned foggy and typically damp, but a dry line soon formed in the warmup session, setting the scene for a dry, but eventful, race.

With a grid of 37 cars, it was almost inevitable that there would be action from the start. Three cars came together on the opening lap, bringing out the Safety Car, and allowing the team to switch strategy by bringing in Lewis, Brendan, and Mark for an early driver change. Lewis had already made a great start from sixth position to run fourth overall, while Brendan had also made gains in P11.

With the field somewhat jumbled, Ollie Wilkinson resumed in eighth position, completing his stint whilst making up ground and handing back to Lewis in P5. A fine stint followed with Lewis making some great passes – first on #69 of Sam De Haan and then the #72 of Adam Balon – to run in fourth position overall. Meanwhile, the #77 McLaren had also made great gains, first with Ollie Millroy and then with Brendan.

Running a superb third overall, Lewis caught and after some laps seeking a way past, claimed the position. Brendan stayed close behind, but a moment whilst battling for position with the #6 of Ian Loggie, saw him run off track, losing 15-second in the process. It mattered little ultimately as an electrical issue soon afterwards briefly halted the car with Ollie Millroy behind the wheel. He was able to restart, taking the chequered flag in seventh position and third in the Pro-Am class.

Having threatened to take the overall race lead after another strong stint, Lewis handed the #96 McLaren over to Ollie Wilkinson who continued to battle with the #6 RAM Racing entry. Following an error from the Mercedes racer Ian Loggie in the previous corner, Ollie had a run for position, but contact was made in the attempted pass, resulting in a spin and subsequent drive-through penalty for Ollie, dropping him down to 13th at the chequered flag.

The #68 McLaren, meanwhile, lost out in the opening laps, with Alex being turned around by GT Cup entry. This cost time and track position, meaning that he and Mark were on the back foot throughout the race. Mark ran a long middle stint with Alex taking over and bringing the car home in 15th position following a strong recovery drive.

The Silverstone 500 marked the 15th weekend on the trot for the team competing in GT3 across Europe and with a debut Pro-Am podium for Brendan and Ollie Millroy, it marks a fitting conclusion to the 2020 British GT Championship.

Shaun Goff, Optimum Motorsport Team Principal
“It wasn’t dull! The #77 of Brendan and Ollie Millroy was impressive in terms of race pace. A strong strategy moved them into contention, combined with mega stints that helped to move them up the order. There was Brendan’s off-track moment, but still, to come away with a Pro-Am podium shows how strong this package was here at Silverstone this weekend. They both leave here pretty happy with their debut in British GT.

“Lewis and Ollie had a bit more weight on the #96 car being Silver-Silver and they were quick in qualifying to start in sixth ahead of some of our Silver Cup McLaren rivals. There was plenty of potential in the race for them both. Ollie didn’t want to waste time behind the #6 and in taking that much kerb, it was impossible to avoid the contact. Not the result they wanted but plenty of plus points for both this year.

“It was a shame the #68 suffered from contact early on. That really compromised their race with a slow puncture and it put us a little out of sync with the strategy. This made it harder for Mark with such a long stint in the middle of the race which was unfortunate for them. They both drove well and enjoyed their first taste of British GT together.”

Ollie Millroy, 77 McLaren 720S GT3
“It’s been a bit of a learning curve adapting to the Pirelli tyres this weekend at Silverstone, but we ended up with such a superb setup on the car, probably the best I have ever raced. If we were offered a Pro-Am podium at the start of the weekend, we definitely would have taken it. We were so fast in the race and Brendan’s stints were absolutely epic. The downside, the small electrical issue with just a few laps to go. Overall though, the weekend and performance has been so good.”

Lewis Proctor, #96 McLaren 720S GT3
“My stints felt good. I was right on the limit and the car felt amazing this weekend here and as the fuel came off, we continued to make gains and progress. It was unfortunate to lose the good position we were in and it was tough being out of the car at the time and watching it, but that’s racing. The team have done a good job all weekend – and all-season long – with flawless pitstops and I believe I made a good step performance wise today. Just a bit disappointing not to get on the podium in this, the final round.”

Alex Mortimer, #68 McLaren 720S GT3
“It has been an enjoyable return to the series for me and it gave my teammate Mark his first experience of GT3. We both knew that we couldn’t turn up at this level and run at the front, but looking at our respective lap times in race conditions, we were in the ballpark and competitive and that’s all you can ask for.”