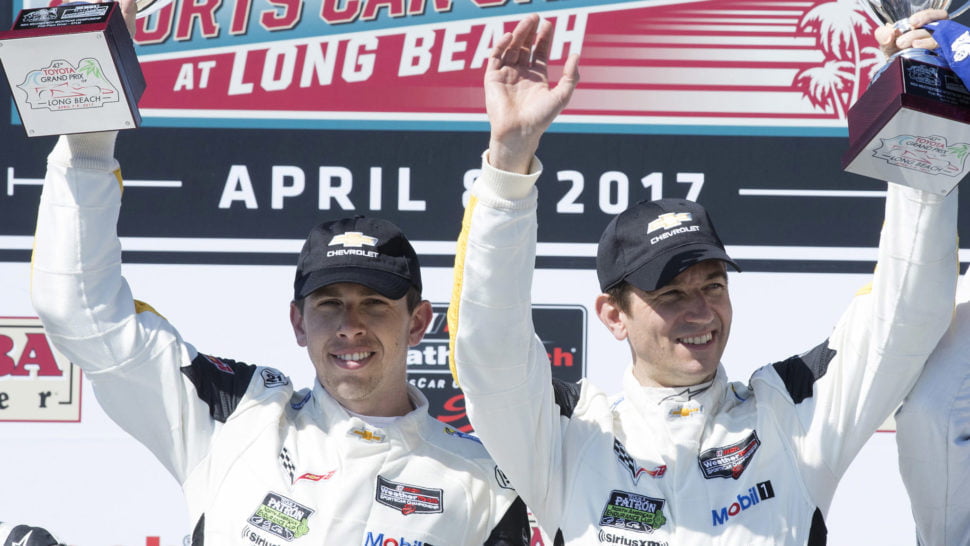 Wins are never easy, but a little luck fell Oliver Gavin’s way as he and Corvette Racing teammate Tommy Milner took the chequered flag first to record GTLM victory on Saturday (8 April, 2017) around the streets of Long Beach, in what was the third round of the IMSA WeatherTech Sports Car Championship.

Running first and second on the road, the #3 and #4 Corvette arrival at the final hairpin on the final lap to find the circuit partially blocked, with Antonio Garcia opting to take the outside line and found his path blocked. This allowed Milner to patiently pull alongside and then make his way through the blocked cars to take a dramatic victory…

“It is certainly the most unusual race I have ever won. Road America last year was a bit special but this was on another level as it was all down to the last lap and the last corner – that’s just the way it unfolded. We managed to find a way through but it’s not the way we wanted to win, we always want to win by going wheel to wheel and winning on pure pace, not this way.

“A win is a win and after a frustrating start to the year this is good result to get our season started. This race was so random at points, it was really the case of who was in the right spot as the landscape kept shifting based on fuel, tyres, some random driving from other people and it really was a case of survival – keeping all four corner on the car – making sure you were there or thereabouts for the last 10-15 laps of the race.”

On strategy and teamwork and some bad luck for the sister C7.R

“We had a good pitstop, the fastest in the GTLM class and the guys worked so hard and that helped us in our battle in the final stages. It was so cruel on the sister #3 car but perhaps we were fortunate to be in the right place at the right time.

“Tommy lost positions in a similar incident at turn 11 earlier in the race and he used that experience to pick his way through on that final lap. But again, we really don’t want to win this way as our teammates had the race taken away from them.

“It was actually quite a hollow atmosphere in the team after the race, despite our win. We got lucky this year and last year the luck was against us with the Porsche taking us out, so some serious luck this year and we’ll roll with it and go with it, we’ve also made some good ground in the championship.”

“The way the race even started was crazy. We came around on the formation lap and approached the hairpin (final turn) at almost racing speed, so into turn one, it was always going to be difficult. The Ferrari was so aggressive and passed (#3 teammate) Jan (Magnussen) and then pushed the prototype into turn five and turned it around. The exit of turn five is heavily cambered away and I knew the accident would be out wide, so I opted to turn inside, give myself some room, and made it through.

“With years of racing, especially at street circuits like this, you get a sense of what will happen and unravel, so I gave myself some breathing room as you could see (from the) the body language of the cars ahead that they were going to have an accident. For the rest of the stint, my aim was to get past Bill (BMW) and give the car over to Tommy as straight and cleanly as possible. We had a great stop, so it was a case of doing the basics well and giving us the option of attacking at the end… almost the foundations to win.”

What goes around comes around…

“We got lucky at the end, but we needed to be there. At the last restart, there was 20 minutes to go and it was the business end of the race. Tommy made a great pass on the BMW and Ford to get us up to second. Then it came down to the last turn on the last lap… It’s hard not being in the car for those final laps, but you trust your teammate. He was a victim last year and this year was a complete flip – we got the luck.

“We’ve now had six wins here – some 50 per cent – so it’s an impressive tally. The team is in a good position, always focused on the business end of the race and that’s a real theme that started about 18-months ago, and has really paid dividends. It’s so important to be focused on those final laps and be ready to go. It’s all about reading the race, understanding the track and using the skill, knowledge and experience of the whole team.

“Now we head to Austin and COTA, where we hope we can have another strong run and really get our championship defence back on track.”