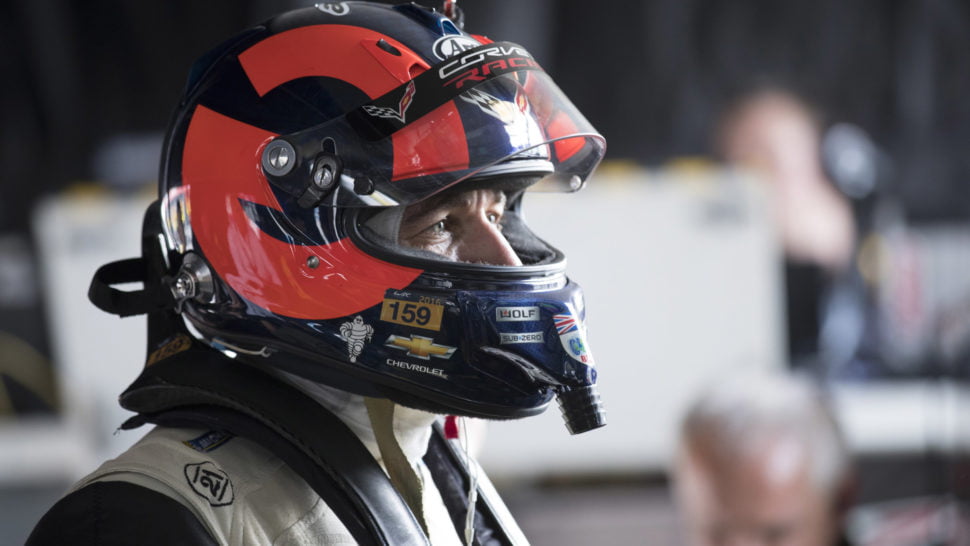 It proved to be a difficult day in the office for Oliver Gavin and Corvette Racing this weekend (28-29 January, 2017) in the Rolex 24H at Daytona.

Having won the event last year in dramatic style, Gavin and teammates Tommy Milner and Marcel Fässler had to settle for a ninth-place finish on a weekend where an incident and a mechanical issue effectively ended the charge for a repeat victory.

• Oliver Gavin finished Rolex 24H ninth in the GTLM class and 16th overall
• After qualifying ninth, Gavin took the first stint despite suffering from the flu’
• The C7.R ran competitively on the lead lap until a collision with a Ford GT after seven hours
• The #4 team lost 21 laps whilst repairs were carried out
• Continuous rain for 12 hours from 8pm made the racing treacherous
• There was an unprecedented seven hours under full course yellow

Key to the race was contact and the breakage of the right-rear control arm…
“Ultimately our race was shaped by the contact from the #69 when Marcel was behind the wheel. We lost a lot of time but we managed to make up five laps that were lost from making the repairs. However, it was far too big a deficit and we were still 16 laps back, finishing ninth.

“At the end, the racing was fantastic and more than anything we wanted to be in that battle at the front just like last year. It looked like a lot of fun!”

After qualifying in P9, it looked to be a good start to the 24-hour race
“Yes, the first stint went well. The first lap, as always here, was eventful! You always have to weigh up how much risk to take to grab a spot from a competitor and it worked out for me and I gained a couple of places.

“From then on it was very close racing with the Ford and Porsche, a lot of fun. I got out after a single stint due to being a little under the weather. I was ill Friday, better Saturday but still fighting it off. And so it was over to Tommy and Marcel after that first stint…”

Cold and wet conditions made this an unusual event for Daytona
“My last stint in the race was okay. I was finally back on dry tyres after hours and hours on rains. The car felt good and we had pretty good pace, but like the sister car, we were just missing a little to the leaders.

“It was certainly one of the toughest 24 hour races for me. From being unwell to then the weather on early Sunday morning… Le Mans 2001 was the last time I experienced conditions as treacherous over so many hours.”

Not the dream result but a strong showing from the Corvette Racing
“We may not have had the fastest car but Corvette Racing once again showed their strengths in the pits.

“For the final stop of the race, the #3 car came in the pits in fourth position and was comfortably in the lead at the pit exit. Amazing pit work. A great job throughout the race by all at Corvette Racing.”