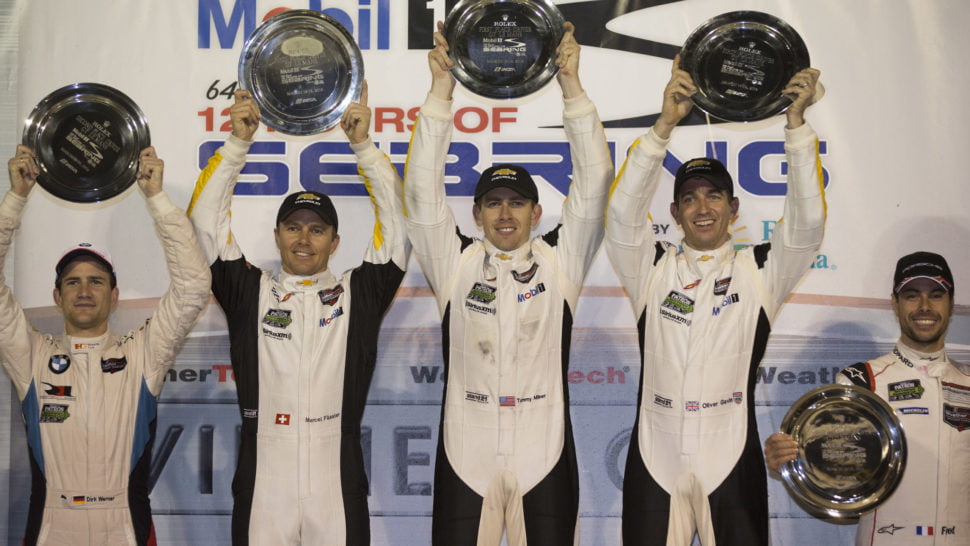 Oliver Gavin and Corvette Racing teammates Tommy Milner and Marcel Fässler are all set for this weekend’s 12 Hours of Sebring, (March 15 – 18, 2017) seeking a repeat of last year’s victory that helped pave the way to GTLM championship success.

Last time out, at the Daytona 24 Hours, Gavin and the team recovered from contact with a rival to finish in ninth position. This weekend, expectations are high as the series reconvenes for round two of the IMSA WeatherTech SportsCar Championship at a venue where the team and Gavin have a winning track record.

Thoughts on competing at the 12 Hours of Sebring

“This is one of the biggest races of the year for us and we as a team have had ten class wins since 2002 and I’ve won five times, so naturally I am keen to add to that tally if at all possible. We’re also again supported by Mobil 1 and all of our victories have come with them, so that’s a really nice stat!”

And the challenge of the circuit and expectations for race day

“The race is again very physical and it’s a hard, aggressive race with no margin for error as it’s a circuit that will really punish you.

“The weather doesn’t look to be an issue unlike last year where rain and bad weather really effected things. It will be nice to have a rain-free event this year.”

Preparations ahead of the race weekend

“We’ve done two tests already this year at Sebring and they both went well. Marcel had a decent amount of time in the car adapting to the higher levels of downforce than we had at Daytona. So, we’re all ready to go, we’ve worked hard on the race programme and the strategy.”

Away from the track, at the Geneva Motor Show

“It was great to be at the Geneva Motor Show representing Chevrolet and Corvette. As the brand ambassador, it was nice to meet with the European dealers and join them for dinner on the Wednesday night. It was also really pleasing to see how much enthusiasm and support there is for Corvette with many questions about the 24 Hours of Le Mans, the cornerstone of the season.”