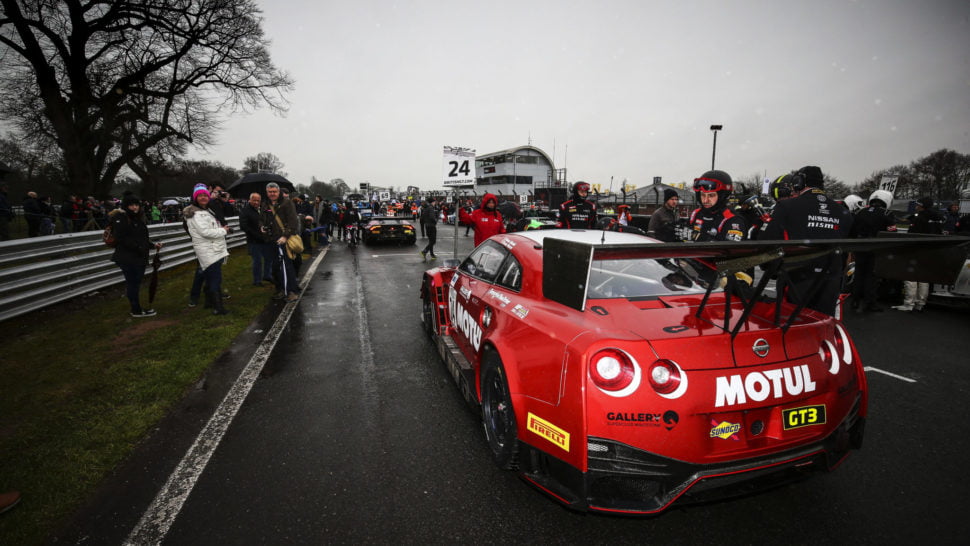 Devon Modell didn’t get the chance to shine as the rain struck Oulton Park for the opening round of the British GT Championship on the Easter bank holiday. With limited pre-season running, Devon had hoped to be competitive from the outset, whilst also aware that the twisty nature of the circuit would never play to the strengths of the #24 RJN Motorsport Nissan GT-R Nismo GT3.

Devon got himself up to speed in the two free practice sessions, putting in a solid 37 laps overall with times just outside of the top ten in the GT3 class. The wet qualifying session saw Devon struggle with excessive understeer in the conditions and that resulted in a tenth position for the opening race of the season.

“That wasn’t really what I was hoping for,” Devon explained. “I’ve been struggling a bit with the balance of the car and going through the corners I could feel the front just washing away and juddering across the surface. The race will be a tricky one for us from here, but we’ll see what we can do.”

Following three laps behind the safety car due to heavy rain, Devon moved up to ninth position, chasing the #69 Barwell entry for a number of laps. The team opted for a later stop than some of its rivals with Devon running second on the road when he pitted and handed over to teammate Struan Moore. The race played out and Moore took the chequered flag in 12th position on what was a difficult day for the team.

The second race of the day was unfortunately a non-event with Struan Moore staring 12th behind the safety car before the race was shortly red-flagged and abandoned due to the extreme weather.

“We feared that the car wouldn’t be suited to this type of circuit and that fear has been unfortunately realised,” Devon said. “It’s still disappointing, but we are now looking forward to circuit with longer straights and high-speed corners that should play to the strength of the Nissan GT-R. It’s just a bit of a shame to start the season this way as we know that car can be very competitive but I’m sure we will get the best from it when we get the opportunity comes our way.”

Devon is now looking forward to round three of the championship which takes place next month at Rockingham Motor Speedway.