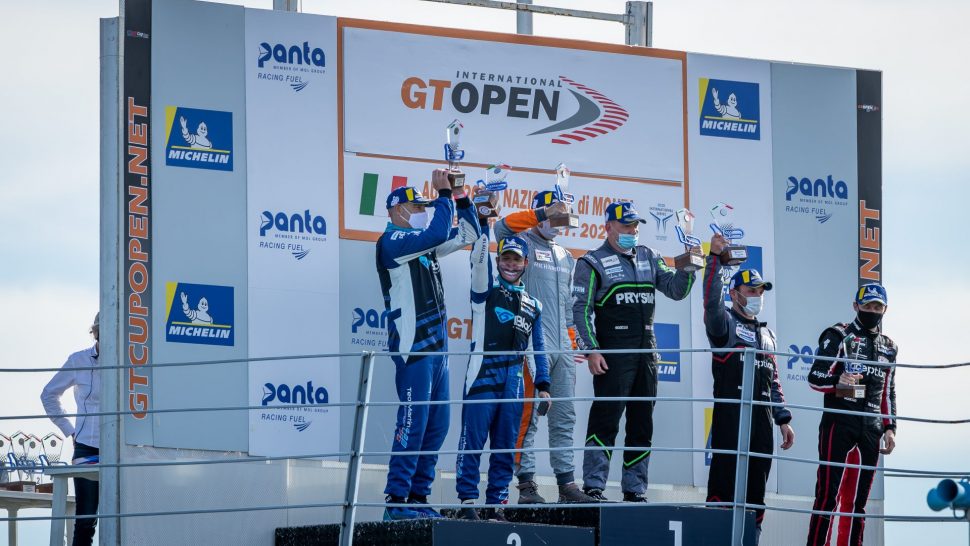 Optimum Motorsport leaves Monza satisfied having claimed class and overall podium positions from the fourth round of the International GT Open Championship.

The seventh race of the season was undoubtedly the highlight of the race weekend with Joe Osborne and Nick Moss finishing third overall in the #72 McLaren 720S GT3, whilst claiming race victory in the Pro-Am class. Close behind, the sister #7 entry of Ollie Millroy and Brendan Iribe finished third in class, eighth overall to claim a superb double-podium for the team.

Saturday’s 70-minute race provided great battles throughout, with Joe making a rapid start from fourth on the grid to vault second overall in the #72 McLaren behind the eventual race-winning #26 entry.

It was a near-perfect stint from Joe, pitting towards the end of the timed pit window and handing over to Nick Moss. The Gentleman racer was however immediately under pressure from the #59 of Henrique Chaves, the two drivers trading positions before Nick was able to get the upper hand in the closing laps.

With a one-second time penalty to be applied due to a pitstop infringement, Nick battled brilliantly into the final lap from a resurgent Charlie Eastwood, taking the chequered flag in second position. The 0.013s advantage turned into a deficit of 0.987s with the penalty applied, but it was still a fantastic drive to an overall podium position, as well as the all-important Pro-Am class win.

The sister #7 McLaren also enjoyed an eventful race with Ollie running fifth for much of his stint, whilst keeping Joe in view ahead. Brendan battled hard in the second stint of the race, defending his position for a number of laps, before ceding to the more experienced Pro drivers. The American GT3 rookie pushed to the end of the 70-minute race, finishing eighth overall, third in class to make it a double podium for the Optimum Motorsport team.

Sunday’s shorter 61-minute race was a bit of a slow-burn, but a late-race safety car compressed the field, allowing Ollie, with Joe close behind to make gains to finish third and fourth in the Pro-Am class, sixth and seventh overall.

Qualifying proved tough for both Brendan and Nick against the Pro drivers, the two racing together throughout the first stint with Nick getting the jump ahead of the mandated driver change. With a 15-second success penalty carried over from Saturday’s class win, Joe dropped behind Ollie ahead of the late race battle for the final position on the Pro-Am podium.

The team are next out in the British GT Championship at Snetterton next weekend, ahead of the GT Open – GT World Challenge Europe doubleheader at Spa-Francorchamps.

Shaun Goff, Optimum Motorsport Team Principal
“It’s been a really positive weekend with multiple podiums both in the overall class as well as in Pro-Am, so a great result for both sides of the garage. We’re looking good as a team with strong pit and teamwork, so we’re really looking forward to Spa where Joe and Nick only have five-seconds of success penalty, while Ollie and Brendan have none.”

Joe Osborne, #72
“Starting from P4, we were always looking to make gains at the start, so it was good to get the jump on Miguel Ramos for third and I went in a bit too deep which tapped the Bentley ahead but I got the position from Vincent Abril. From there it was all about trying to be consistent with me and Abril being pretty close in terms of lap time. The team did a great job, we maximised my stint and then Nick got in and drove a terrific race with no mistakes and great pace, so nothing but positives from the first race.

“Race two was always going to be hard with the 15-second success penalty. It’s an interesting method that GT Open use and sometimes you see cars aiming to finish fourth to clear these penalties, so we knew it would be difficult. Nick’s qualifying wasn’t great by his own admission, but he had a trouble-free stint and then the safety car gave us a lifeline and we could make progress. In the end, we were fourth, so we lose ten-second ahead of the next race at Spa!”

Ollie Millroy #7
“The start of the first race was tricky as Miguel Ramos left a big gap ahead of him – almost a full row of cars space-wise – but we stayed out of trouble at turn one and then we were into the race itself and while we had good pace, our consistency wasn’t what we would have liked. Brendan picked up the pace at the end of his stint towards the chequered flag, so while we were not quite where we wanted to be, it was still nice to secure a class podium and a good experience for him to be racing against some of the Pro drivers.

“The second race and the safety car made the end of my stint really difficult. The Bentley ahead was holding us up but was also too quick on the straights for me to pass him. I also had Joe right behind me, but overall, it’s been a solid weekend and Brendan drove well and continues to improve with each race and we came away with two Pro-Am podiums.”