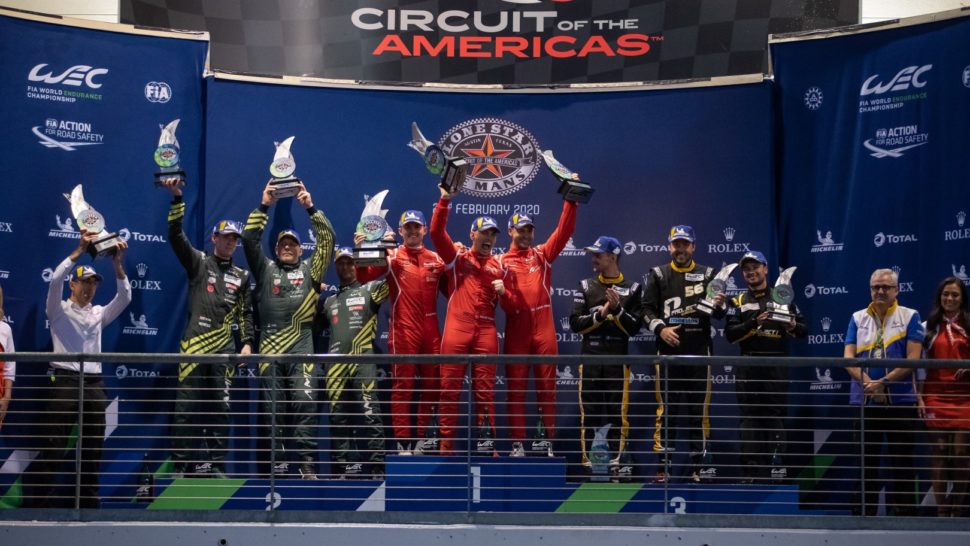 In a thrilling race at Circuit of the Americas, TF Sport claimed their third FIA World Endurance Championship victory of the 2019-20 season following a race-long battle with Pro-Am title rivals Aston Martin Racing.

It came down to the final 30 minutes of the six-hour event, following tremendous stints from Salih Yoluç, Jonny Adam and Charlie Eastwood in the #90 Aston Martin Vantage GTE. At no point was the result certain, but superb performances from the team and drivers alike ultimately resulted in a fight to the flag and a valuable championship point haul with three rounds remaining.

The fifth round of the championship proved tricky for the team throughout the four-hours of Saturday practice, partly due to circuit and air temperatures. Come the qualifying shootout, Charlie and Salih were much more content with the handling of the Vantage, recording a time good enough for third in class.

Confidence was high heading into race day, and it was Salih who was charged with the first double stint of the event. The Turkish driver made a good start, battling initially with the #57 Project 1, before settling in behind the #98 Aston Martin of Paul Della Lana. This was the battle of the race and what that would see all three drivers pushing for the victory.

Salih made the pass for position as early as lap six, but the position reversed shortly afterwards. Approaching the one-hour point, the two made contact and even as both resumed, just 12 seconds covered the top three runners. Game on.

The second stint saw Salih defending form the #57 of Ben Keating behind. It was a robust performance and he was able to keep the #90 in the battle towards the front of the field before pitting and handing over to Jonny.

In opting to pit a little earlier than the rival #98, Jonny was able to make best use of clear air and the shorter stop strategy to vault second, quickly closing the gap to the leading #56.

Indeed, by mid-distance, the gap was down from 35 seconds to 20. Pitstop strategy however would continue to play a significant role as following the third stop, he found himself behind the #98 once again; this time being driven by Darren Turner.

Undaunted, Jonny soon passed the #98, closed on the Egidio Perfetti and then made the move for the lead with over two hours remaining. It was a very impressive double stint from the British GT Champion, handing over to Charlie with a small cushion. The pitstop strategy continued to play out with the #98 of Ross Gunn right in contention, taking the lead during the final stop.

This left Charlie with a clear challenge and one he executed perfectly with 20 minutes remaining, making the move for the lead with a clear pass; one he would hold to the chequered flag. The third win of the season moves TF Sport second in the standings, with 83 points, just two shy of the championship leaders heading to Sebring.

Tom Ferrier, TF Sport Director
“It was really tight the whole way through. Salih did his normal great job to get us into the position to be challenging. We made some changes in the race; the front compounds for Jonny and Charlie’s stints and that was the right way to go as it worked well and that made it game on. It was a good race as we were on a different stop strategy, we had a shorter first stop and then it looked we were way ahead and would then lose the time due to strategy on the next stop.
“It’s not been an easy week as we were a man down with Jason unwell. So, we had to switch the crew around a little, but they all did a great team job, as did the drivers who had to do their own driver-changes. We will have more (success) weight at Sebring, but you have to take a win when you can and it was good to see the red one at the front.”

Salih Yoluç
“It was a good opening stint and we had a good fight with Paul (Della Lana) and that help set things up for us. It was a fight from the start to the end. They put in a good race too, but we’re very happy with the result after the problems in Bahrain. My teammates did a great job; I think it is the best driver I have ever seen from Jonny especially, so now we hope to keep the momentum going to Sebring.”

Jonny Adam
“It was a great race and one we needed after the misfortune in Bahrain. The car really came alive today in race conditions and was right in the peak window of performance. All three of us had fights with the #98 on track and I really enjoyed my battle with Darren. My second stint was even better in terms of the car speed, and then I got to watch Charlie tussle it out with Ross for the race win, just as GT racing should be. Two identical cars fighting for the win. We couldn’t have asked for more, a great team effort all around.”

Charlie Eastwood
“That was the most exciting of my WEC races to date. We were on a slightly differing strategy and so they kept jumping us in the pitstops. Tom (Ferrier) came onto the radio and asked me to do quali-laps every lap to gain the six seconds gap. I kept chasing and chasing and when you actually get there, the dirty air – a lot of high-speed corners – makes it a struggle. I was just waiting for my moment to get Ross, ever-so-slightly offline and then the move was pretty good!

“He went defensive at the end of the back straight and into the hairpin and then I knew I had a good brake performance, so I looked at my markers and made sure I brakes as late as I could. It was a bit of a squeeze, but we made the corner.”