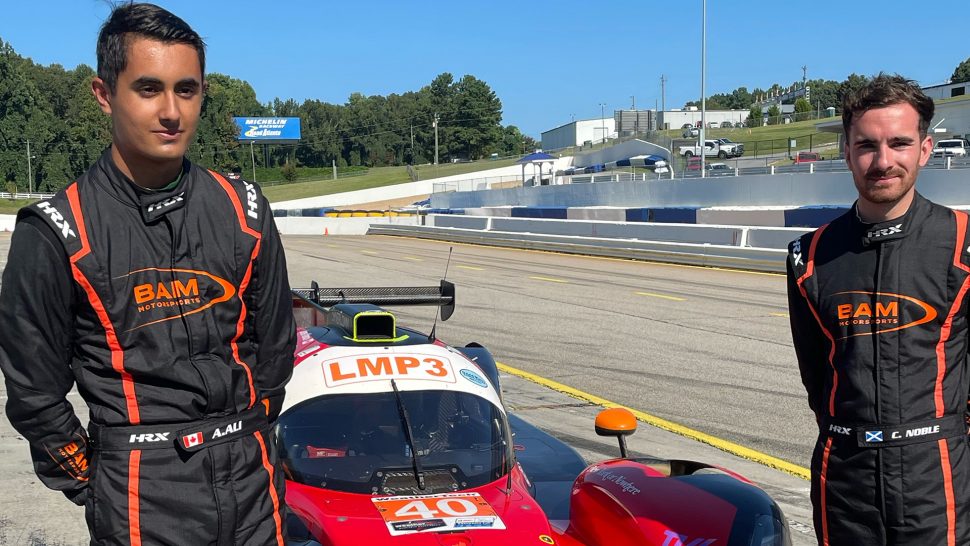 Colin has a wealth of experience in LMP3 competition in Europe but will be making his IMSA WeatherTech SportsCar Championship debut. Armed with multiple victories in the UK and Europe, he will lead the #40 FastMD Racing entry and will be joined by Adam Ali, who is set to make his LMP3 race debut following successful tests in Europe with Inter Europol Competition.

Colin currently competes in the Michelin Le Mans Cup with Nielsen Racing, and already has the British LMP3 Cup, Asian Le Mans Series and Michelin Le Mans Cup titles to his credit. This year he secured a podium at the prestigious Road to Le Mans race at Circuit de la Sarthe and has been actively involved in the development of Adam’s journey from karts to cars.

Under the guidance of Colin, Adam has completed an extensive test programme, first at Vallelunga and then at Monza and will now aim to turn the knowledge gained, into race experience as he competes in LMP3 equipment for the first time.

It will be a steep learning curve for the young Canadian; adapting to the demands of a new team in FastMD Racing, an unfamiliar Duqueine D08 chassis as well as a brand new championship. Under the watchful eye of both the team and Colin, Adam will take it step by step throughout the practice sessions in readiness for his race car debut.

FastMD Racing joined the IMSA championship trail last year at Petit Le Mans, finishing in a fine fourth position with Maxwell Hanratty who will race again this year alongside Colin and Adam.

Motul Petit Le Mans takes place on Saturday October 1st at 12:10 ET where BAM Motorsport Management will be represented by Renger van der Zande, Fabio Scherer, Nicky Catsburg as well as both Colin and Adam; a representative in each IMSA class.

Adam Ali
“I am very happy to announce the next step in my prototype racing career. After a comprehensive testing program and with tremendous ongoing coaching support from Le Mans Cup champion Colin Noble, I can officially announce that I will be making my LMP3 racing debut at none other than Petit Le Mans, the final IMSA endurance race on the 2022 calendar.

“Starting my career at such a high-calibre event will pose many challenges. However, with the complete support from the FastMD race team and Team Principal Remi Lanteigne, this is a valuable opportunity that cannot be missed. I have been testing the Duqueine LMP3 race car. Building on my previous experience in the Ligier LMP3, I welcome the challenges that will help me develop my prototype racing skills.”

Colin Noble
“I’m really looking forward to my first race with FastMD and my first race in IMSA. We had a really good test this week; made good progress and so we’re looking to keep that momentum going into what will be an exciting race weekend!”

David Madgwick, BAM Motorsport Group MD
“It’s been a pleasure to see Colin working with Adam in preparation for his LMP3 debut. As a management firm, it’s all about utilising and maximising the talent that we have on board while helping those rising through the ranks in their process of becoming professional race drivers.

“I am sure that FastMD Racing will be the perfect environment for both Colin and Adam to make their respective debuts at Petit Le Mans and help us all build towards the 2023 programme.”