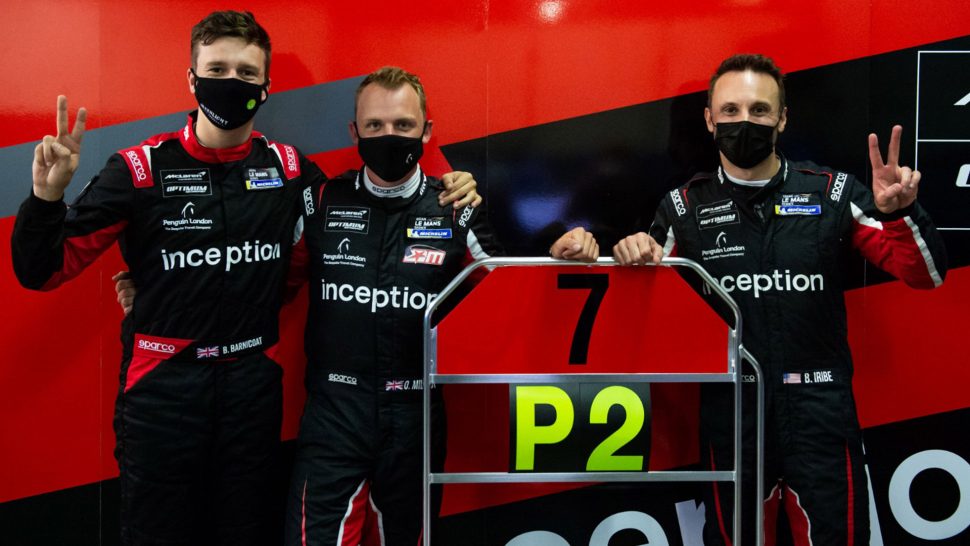 Inception Racing put together a flawless performance today (February 13, 2021) as the Asian Le Mans Series got underway with the opening round of the championship at Dubai Autodrome. Starting eighth in the GT class in the distinctive #7 McLaren 720S GT3, Brendan Iribe, Ollie Millroy and Ben Barnicoat all shone in the four-hour race, making gains as the event progressed to finish a fine second in the GT class, 15th overall.

The team began preparations for the event with free practice in the week and then qualifying, which saw the #7 squad and Ben disappointed with its start position. However, the Inception Crew were confident that race conditions would be a different matter, and so it proved to be, as the red lights went out for the first round of the Asian series.

Brendan was tasked with the first stint, making up a couple of places during the opening laps and settling into the race rhythm before handing over to teammate Ollie after 80-minutes of running. Ollie started what would be his double stint in seventh place, quickly disposing of the #97 Aston Martin of Tom Canning and the #34 of Chandler Hull.

Soon a battle with the #1 HubAuto entry driven by Marcos Gomes became Ollie’s focal point as he closed up on the rear of the silver Mercedes. It was a tight contest and when the #1 clipped the lapped #54 in traffic, Ollie was able to take the position and then pull a small gap in what was now third place. It was a fine stint by Ollie who handed over to Ben for the run to the chequered with less than an hour remaining.

Ben was now clear of any challenge from behind as he circulated in a relatively safe third position. A mistake from the #40 Porsche however saw the GT class leader spin and then subsequently punished for persistent abuse of track limits, awarding the #7 Inception Racing crew not only a series debut podium, but the GT class runner-up position ahead of Sunday’s second round of the championship.

Shaun Goff, Team Principal
“The team were flawless today and we came back from a less than perfect run yesterday in qualifying. It was a great race from everyone on the #7 team and we’re very happy to score such a strong result – the podium – on our debut in this championship.”

Ollie Millroy
“That’s a mega result for the team and for McLaren. Everyone has been working really hard over the winter to keep extracting performance gains, so a really good result for everyone. Brendan made a great start and then I got in with the plan to wait and see in terms of the Full Course Yellows. It ended with me doing a double stint. We had good pace compared to those around us and then Ben brought the car home; Brendan and the whole team are super-pleased with the result!”

Ben Barnicoat
“It was great to secure such a good result on my debut with Inception Racing and so impressive to see how hard everyone has worked to get this result. Brendan had a great start and gained two positions and that set us up nicely for Ollie who then did a double stint due to the timing of the Full Course Yellow and to gain the required drive time. He ended his run in P3 and it was then a case of me getting in the car and then really making sure that we played it safe with the track limits and so I had to be a little more conservative to ensure that we got the result we deserved.

“For me, I’d like to thank the team and my teammates for the great strategy and the heavy lifting in terms of the track performance! Let’s see what we can do tomorrow, but based on today’s performance, we should be able to secure good points heading to Abu Dhabi.”